If you didn’t have a chance to attend the general sessions in person — or you need a refresher — we’ve brought them to you! See the top news from each of the sessions, including the:

The biggest reveals in Monday’s General Session all revolved around the 3DEXPERIENCE platform:

3DXPERIENCE World 2020 opened with the flashing lights and energetic music we’ve come to expect. Yet, under the glitz and glamor, the message was clear: the 3DEXPERIENCE focuses on human-centric design and extraordinary innovation. To double down on this message of innovation, the Dassault Systèmes team announced the launch of several new apps and experiences, most importantly 3D Creator and 3D Sculptor, next-generation design applications that run in any browser, anywhere.

Dassault Systèmes CEO, Gian Paolo Bassi, kicked off the general session with a message about the importance of following our childhood dreams. He explained that to be human is to dream, but along with those dreams comes the hard work of turning them into reality. That’s where designers, engineers, manufacturers, and makers come into play. He asked the question: How do we truly reflect and impact human lives? How do we make the human experience better? Bernard Charles, Dassault Systèmes vice chairman of the board of directors and chief executive officer, explained that the true mission of the 3DEXPERIENCE platform is to help innovators change the rules of the game and create a better future together.

Through 3DX, you can gain access to applications that will help you design, inform and collaborate on projects, Charles said. You can set up your own personal dashboard and invite all your team members to participate in your project. You can access the platform any time and from any device, as it’s all on the cloud. Everyone has the latest version of your project, and data are never lost. Share what you want with whom you want through rigorous security features.

One organization that’s taken the 3DEXPERIENCE platform and “rolled with it” is Magic Wheelchairs. Creating wheelchair costumes for children with disabilities, this nonprofit received a sponsorship by the 3DX Lab to expand their offerings and create even more amazing Magic Wheelchairs. Now, volunteers can sign up to build a magic wheelchair, and they get access to the 3DX platform and all of the tools that go with it. As they’ve grown their programs, they’ve been able to experience kids helping kids build models. 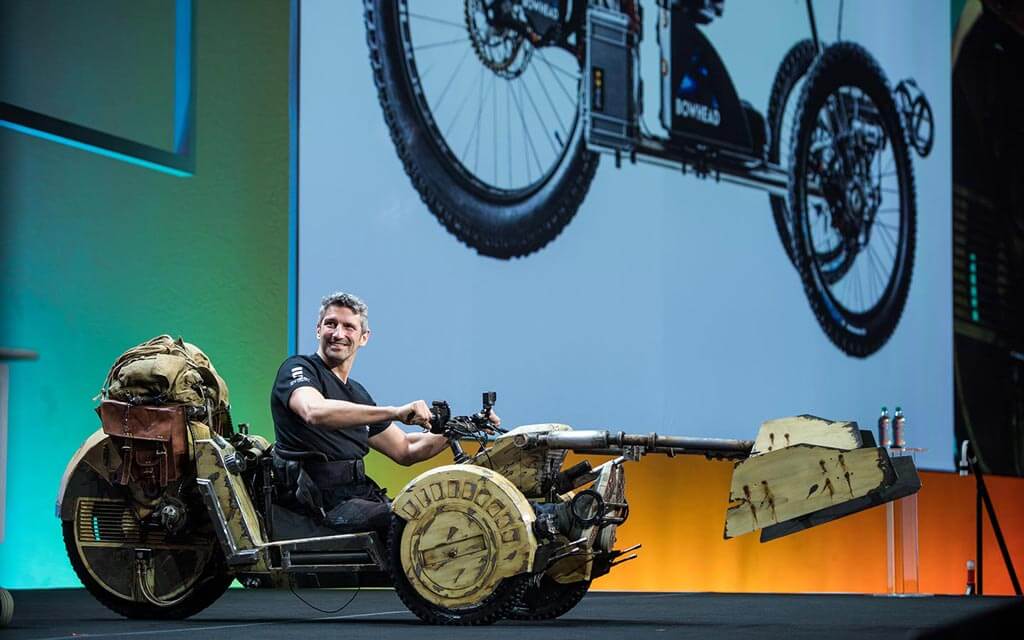 Another organization that’s benefited from the 3DEXPERIENCE platform is BioDapt, founded by Paralympic gold & silver medalist and 10-time X Games gold medalist Mike Schultz. After suffering a traumatic motocross crash, Schultz had to have his leg amputated. After the surgery, he went to his workshop to engineer a replacement leg that would enable him to continue doing what he loves: racing and competing. Four months later, he created the Moto Knee. And seven months after that, he won a silver medal on a leg he’d built in his garage. Now, his company, BioDapt Inc., has connected with the founders of CAD Project Development, experts in creating complex surface geometry for the plastics industry, to evolve and iterate his prosthetic designs. They explained that the new 3D Sculptor tool helped them create such a complex form, as it allowed them to focus on proportions and finesse as they went. 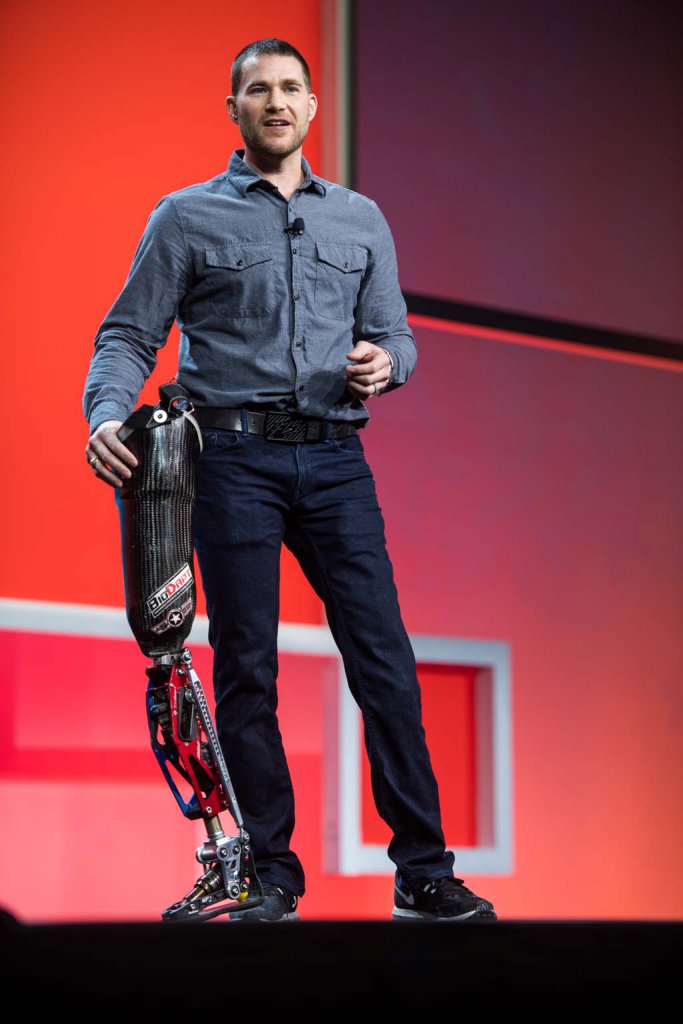 The keynote speaker for the day was Charles Adler, co-founder and former head of design for Kickstarter. Adler explained how he was always obsessed with the industrialization of creativity and humanity. He wanted to find a way to bring new creative voices into the spotlight. But he struggled with figuring out how these small-time artists could get noticed. Kickstarter was born to help solve that problem. Adler never expected it to grow into the global sensation it is today, distributing approximately $4.7B to more than 176,434 projects. The success of Kickstarter has given Adler an optimistic outlook on the future of creativity. We’re now in this moment where the rules are changing each day, he said. And each one of us has the power to change the rules that are being created. 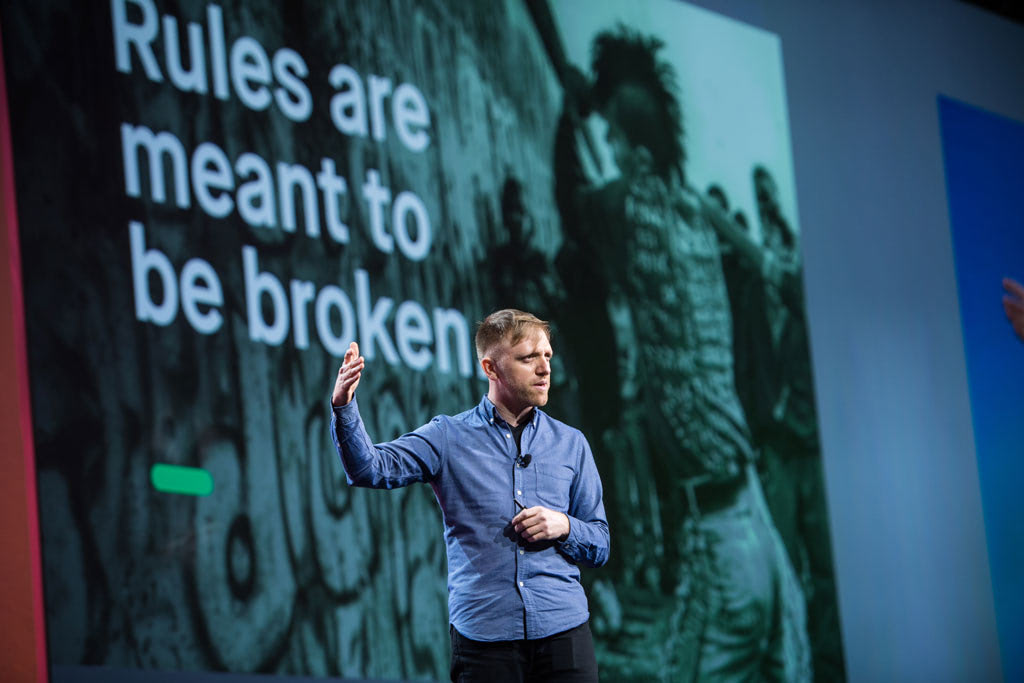 The play-by-play of Tuesday’s General Session

Where the first general session of the week talked on a high-level about innovation and dreams, the second session dug into the details of how the 3DEXPERIENCE platform can help companies turn those dreams into reality.

Florence Hu‑Aubigny, executive vice president of research & development at Dassault Systèmes, summed up the 3DEXPERIENCE by calling it a platform for “knowledge and know-how.” It brings together the entire team, from engineering designers to marketing and sales. The object: to empower teams along the entire revenue stream. 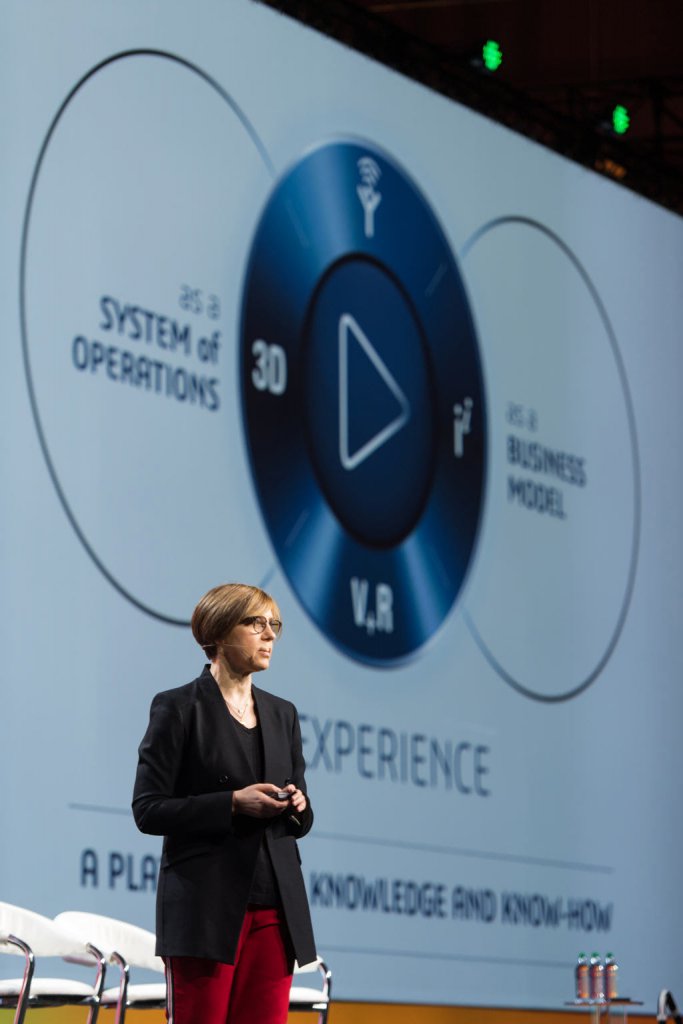 Manish Kumar, R&D SOLIDWORKS applications senior director, explained how to unlock the benefits of the 3DXPERIENCE platform by sharing the story of a fictitious lawn care company called Clip Lawn Care. The senior manager wanted the team to design a new lawn care experience for their customers. One team member got an idea for a Roomba-style lawn mower, which she posted in the 3DEXPERIENCE Community to share with her team. The team collaborates back and forth in the Community, sharing comments, pictures, and ideas in real time.

After agreeing on the general concept, the design engineers began creating prototypes in SOLIDWORKS. Using the part supply service in the 3DEXPERIENCE platform, the team searched the catalogue for the parts they needed to build their machine. Meanwhile, another set of team members used CATIA electrical 3D designer to connect the battery and the motor. The project manager kept track of everyone’s tasks within the platform to make sure the project remained on schedule. When the product was fully designed and ready to go, the team sent a high resolution image to the marketing team through 3DEXPERIENCE. “Design on your own terms, anywhere and anytime with any device,” Kumar summarized.

Several companies explained how they’ve used the 3DEXPERIENCE platform to better manage their end-to-design engineering process, from ideation through sales. For example, Mikael Hebring from WAKE electronic surfboards, explained that supply can be a nightmare for them. With the 3DEXPERIENCE platform, they’re able to be as efficient as possible. Similarly, Mustafa Tului from WatchX, Chetan Keny from Rize 3D printing, and more were able to be incredibly productive and scale quickly, thanks to 3DEXPERIENCE. 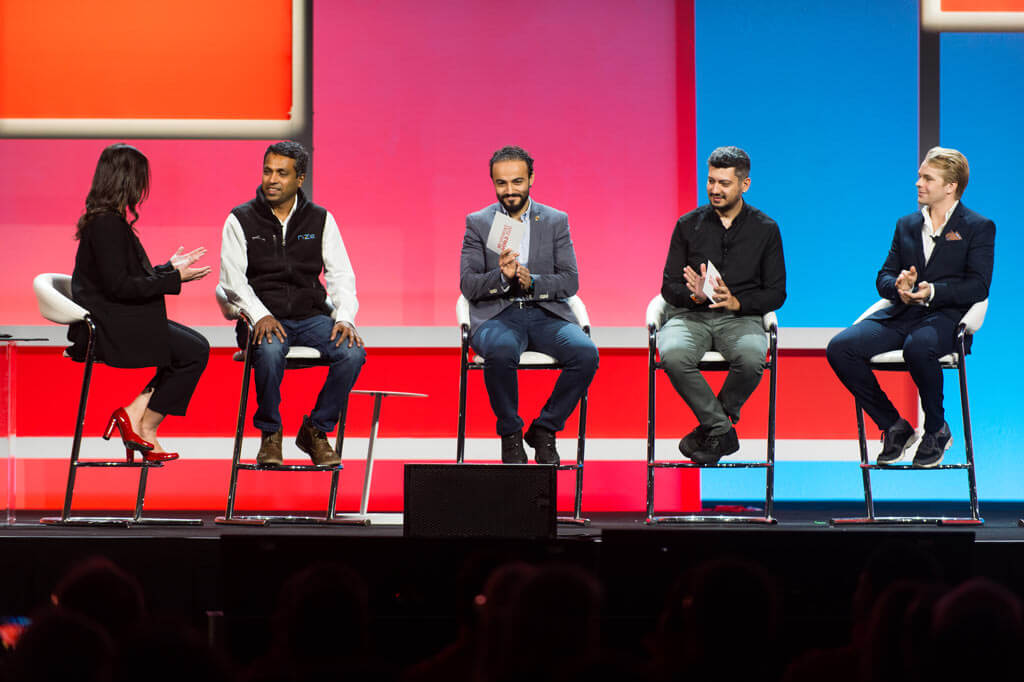 There weren’t any major revelations at the Wednesday Closing General Session. Instead, the session focused on highlighting members of the SOLIDWORKS community who have been using their design skills to engineer a better world.

The biggest reveal was the Pitch Battle winner: Winter Innovations. The start-up has a patent pending for its Easy Whip suturing needle, designed to make whip stitching in orthopedic surgery easier.

Suchit Jain, vice president of strategy and business development at Dassault Systèmes, took the stage to thank the SOLIDWORKS community for all of its innovations and contributions to creating a more sustainable world. He introduced a few different SOLIDWORKS users who’ve been designing impressive new products:

Sam Rogers from Gravity Industries walked us through the creation of the jet suit. Through various rounds of trial and error, the team was able to augment the human body with propulsion, enabling them to fly with minimal equipment. Even more impressive, the team was able to 3D print every element of the jet pack. Rogers explained the importance of using what you have to make what you need. He also doubled down on the message of safe failure. Next up for the Gravity team: Jet suit races! The first one is scheduled for March in Bermuda.

The final speaker of the session was Dean Kamen, founder of FIRST Robotics® and Deka Research. Throughout Kamen’s professional life, he’s invented countless life-saving products like the portable insulin pump, home dialysis machine, water purification box, metal medical stents, balancing wheelchair, and so much more. He advised that invention is different from innovation. There are millions of inventions, he said, but true innovations are harder to come by because innovations are about turning an invention into something that can be used and understood by the public. And the public is notoriously slow to adopt new ideas. He added that it’s at the intersection of different industries where big innovation happens.

One of the innovations he’s most proud of is creating FIRST Robotics, the first organization to really combine the excitement of sport with the rigors of science and technology. But it’s not just about robots, he said, it’s about giving students a way to work hard and have fun with the help of world-class leaders in technology. It’s about humility, hard work, and collaboration. “This is a crossfit workout for the muscles upstairs.” If your company is interested in supporting FIRST Robotics, visit the website for sponsorship opportunities. At SolidProfessor, we are proud sponsors of FIRST! 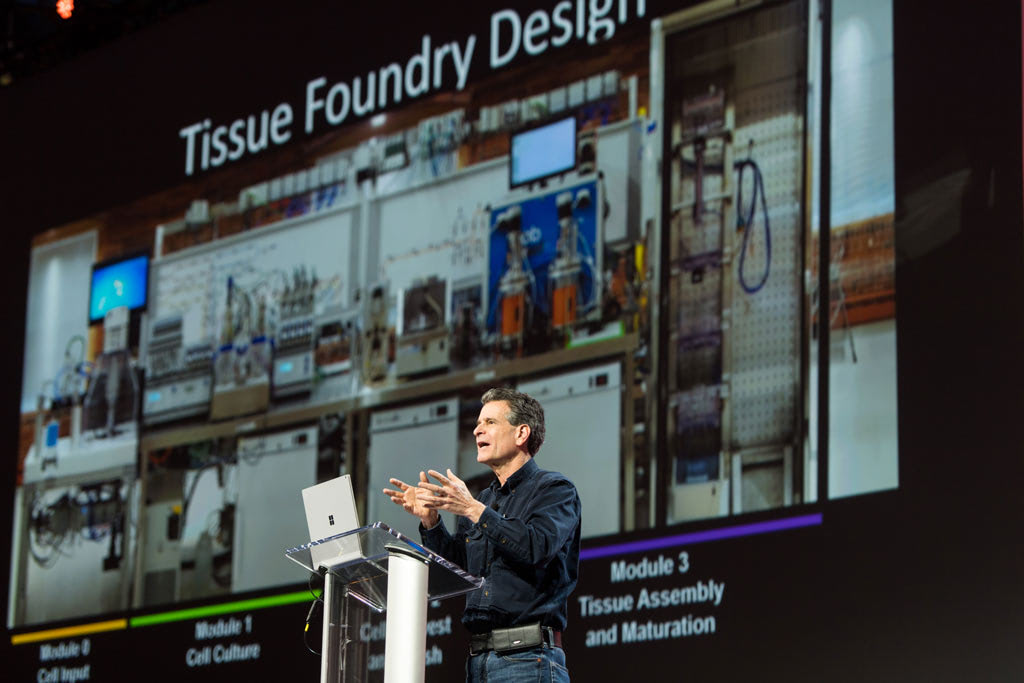 That’s a wrap! If you have any questions about 3DEXPERIENCE World, SOLIDWORKS, or anything in between, feel free to contact us. 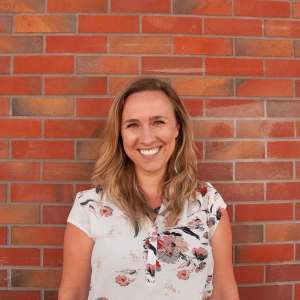